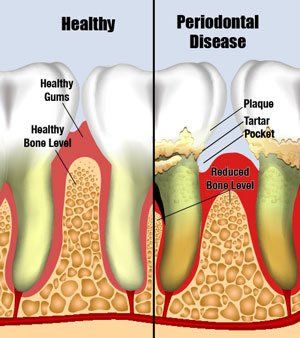 One of the biggest factors in gum disease is the presence of plaque and calculus (also known as tartar). Other factors for gum disease include age, smoking, genetics, stress, bruxism, and other systemic diseases.

If a patient hasn’t seen a dentist or had a cleaning in a long time, there is more likely to be a buildup of plaque and calculus. This is irritating to the gums and creates a bacterial infection. Periodontal pockets, which are big spaces between the gums and the teeth, are formed due to buildup of plaque and tartar and harmful bacteria. As the pockets get deeper, it becomes more difficult to clean the area under the gums with regular brushing and flossing. This is when a deep cleaning, also called a scaling and root planing, is recommended.

Deep cleanings are recommended as the first step to treating gum disease. During a deep cleaning, one of our hygienists administers local anesthesia to keep the patient comfortable. An ultrasonic and hand instruments are used to remove calculus below the gum line and flush out bacteria in the pockets. Localized antibiotics can be placed in deeper pockets. The goal of the deep cleaning is to remove irritants under the gums so that the gums can heal. As the gums become healthier, the pocket between the tooth and the gum becomes smaller. When the gums return to normal health, the patient is able to clean them well with proper brushing and flossing.

After a patient has had a deep cleaning, we recommend dental cleanings every 3 months. This gives the patient the best chance at keeping plaque, tartar, and harmful bacteria at a minimum. This creates the best opportunity for maintaining healthy gums. How Do Dental Implants Improve My Smile?

For people who are currently struggling with missing, damaged, or misshapen teeth, dental implants in Boston, MA can be a Why Would I Get Dental Implants After a Tooth Extraction?

Whenever possible, dental professionals try to save existing, natural teeth. However, when a tooth has undergone extensive damage or decay—or

You Are Welcome Here.